On the 19 February 1853 Ferdinand II of Bourbon signed a decree with which he commissioned the arch. Errico Alvino - an extraordinary commissar for Via Chiaia and S. Ferdinando - to design an underground viaduct that, passing under Monte Echia, joined the Royal Palace with Piazza Vittoria, near the sea and the barracks.

This decree had no social purposes; Alvino considered the realization of a military passage, in defense of the Royal Palace, for the troops stationed in the barracks of via Pace (now via Domenico Morelli), as well as a safe escape route for the same monarchs, after the risks of 1848s riots.

The architect designed an excavation with trapezoidal section, width and height of 12 meters, divided into two ways for opposite directions. These galleries had to be large 4 meters each, and separated by a slim parapet supporting the gas lamps and endowed with lateral 2 meters wide sidewalks. 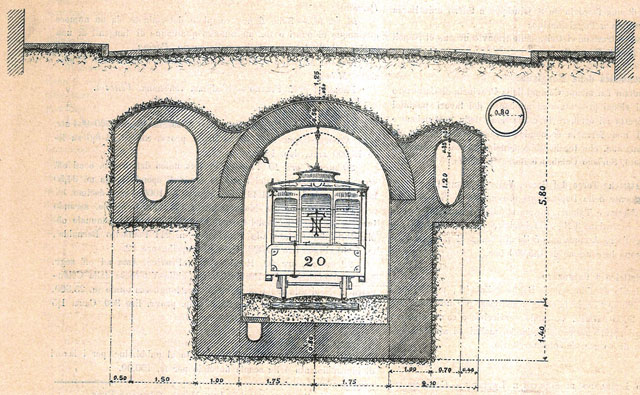 The Tunnel in Chiaia had to be named "Royal Gallery" or "Road Regia", while the gallery in the opposite direction was called "Strada Regina". Both galleries would have started from the old cavalry barracks in ex Via Pace but one would have reached Carolina Square behind the Colonnade of Piazza Plebiscito and the other Via Santa Lucia.

Works to open the track started in April 1853; Alvino began the excavation in today's via Domenico Morelli (formerly via Pace) from the widening that corresponded with a former quarry where the current access to the Tunnel is located. No digging attempt was made from the opposite direction.

Two tunnels, one for carriages and the other one for pedestrians, which proceeded parallel till 84 m, had to end inside the Carafa Caves, which had already been used since the sixteenth century for the construction of various buildings in the area.

Before reaching the Carafa Caves, currently a multi-storey car park, the excavation of the Bourbon Tunnel met an active passage pertaining to the sixteenth-century Bolla aqueduct branches. In order to avoid depriving water of some buildings in Via Cappella Vecchia, ingenious hydraulic works were carried out to allow the water to pass at lower altitudes than the gallery. After that he started off with the second section of the tunnel whose excavation had technical problems.

In particular, after about 40 m from the Carafa quarries, the earliest and highest-level environments were intercepted. The excavation section became irregular and created static problems to the structure. The architect Alvino made regularization of the upper and lower sections as far as possible, while at the same time created a series of transversal modules each consisting of a arch. These wall-masonry structures blocked the opening of the fractures and the excavation could safely continue. 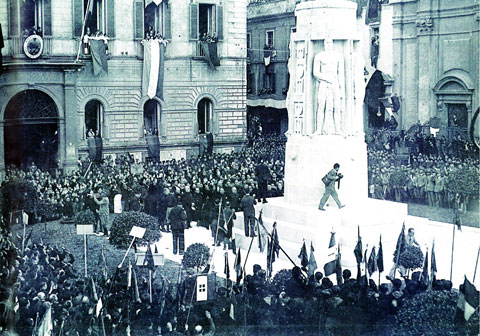 After 200 m from the beginning of the excavation, a large tank of the 17th-century water network was found, which supplied the city of Naples, while he met another large tank after about 245 m. Even in this case, in order to avoid depriving of water the above-mentioned houses of Via Egiziaca at Pizzofalcone, he found an impressive solution: a 8 m high bridge from the bottom of the tank was made, and colossal walls in tuff and bricks rose to isolate themselves from possible accesses due to the presence of any further wells.

After this area, the tunnel continued with a section of m 4 of width x 3 m of height and marginally intercepted another huge tank overcome, even in this case, by a 20 m long and 10 m high bridge, after which the excavation continued with the same section.

At 337 m from the entrance, the section is then lined with masonry in the walls and in the vault, reduced to 1 x 2 meters, becoming pedestrian only, due to the discovery of a loose pyroclastic storage bag 69 meters long, resulting from lack of solidification of tuff due to natural causes.

After passing this obstacle, the tuff reappeared, and the section returned to 4 x 3 meters until the end of the excavation, reaching Carolina Square in the courtyard behind the colonnade of Piazza del Plebiscito, with a length of 431 m. The excavation never arrived at the Royal Palace, and until the Second World War, was without exit.

Two vertical wells were dug in the streets of Santa Maria Egiziaca and Monte di Dio to facilitate ventilation inside the tunnel. Later, in order to prevent the wells from promoting the access of strangers by endangering the safety of soldiers passing through the tunnel, the architect decided to close them with two masonry about 12 m high. However, only one was achieved, while for the second he prepared the shape of the section on the tuff walls and set up the foundations. 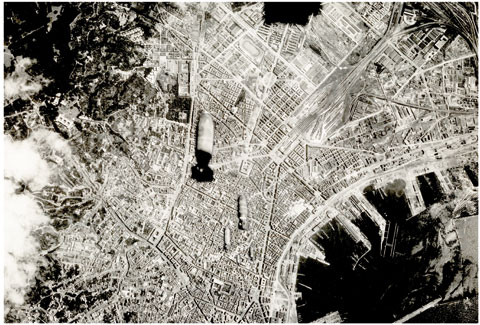 The works were completed in May 1855 after about 3 years of work entirely made by hand with picks, hammers and wedges, and with the aid of lighting provided by torches and candles. On the 25th of the same month, the Bourbon Tunnel was decorated and illuminated for the visit of Ferdinand II of Bourbon, remaining open for public transit for only 3 days. Several variants were made during the work; for example, the size of the entrances was changed but, above all, it was decided to continue after the "Carafa" quarries with a unique Tunnel and the project to open shops along the tunnel route was abandoned. In the following years the project was suspended for economic reasons and the changed political situation that led to the unity of Italy.

During the war period, between 1939 and 1945, the Tunnel and some former neighboring cisterns were used as shelter for citizens. Here found refuge between 5,000 and 10,000 Neapolitans, many of whom lost their homes during the numerous bombings suffered by the city, both by the allies and the Germans.

Different entrances were created to allow safe access to people. In particular, a spiral staircase was made, just at the end of the work of architect Alvino, which allowed access to the Tunnel from Carolina Square. From the nearby palace of the Prefecture was also created a horizontal link that was inserted right on the spiral staircase to allow the employees of the palace to reach the shelter.

In addition, the tunnel and surrounding environments were equipped with electrical systems and restrooms by the UNPA engineers - the National Union of Air raid Protection - using economic resources from the Ministry of Interior and the City of Naples; at the same time, most of the walls and vaults of the environments were covered with white lime with the dual aim of avoiding the breakup of the tuff and improving the brightness of the spaces.

After the war and until 1970, the Bourbon Tunnel was used as a Police Car Pound where all that had been extracted from the rubble caused by the two hundred bombings suffered by Naples was stored. Here was collected all that until the '70s was recovered from collapses, evictions and seizures. 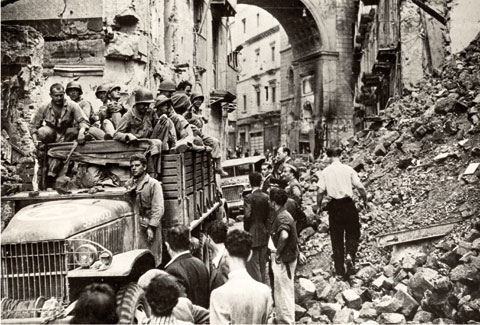 In 2007 geologists working in the tunnel discovered a walled passage that separated it from another large cavity that had been turned into an air-raid shelter. In these environments the same geologists found another access to the shelter, which in the 17th century was already an entrance to the subsoil. The passage was used by the "pozzari", upkeepers that worked for the maintenance of the cisterns. This is a narrow staircase of 75 steps that leads to a room in Vico del Grottone, behind the church of Piazza Plebiscito.

In addition to the numerous vehicles and motorbikes, under 8 meters of debris, several statues of different periods have been found, including the funeral monument in honour of Captain Aurelio Padovani, captain of Bersaglieri during the First World War and founder of the Neapolitan fascist party.

The Bourbon Tunnel of Naples